Two years ago, Gloria and her loved ones became concerned for her safety. Gloria had been diagnosed with diabetes and continued to have concerns about living alone with limited walking ability. In 2017, Gloria decided to purchase a medical alert system after seeing a commercial about them on TV and then researching Medical Guardian online.

Once it arrived, she wore her medical alert device every day. Gloria was happy to have it and pleased to have never needed it—until Sunday, March 31, 2019, at 2-o’clock in the morning. And to think this was just one day before she thought about canceling service because she had never had to use it before.

The last thing Gloria remembers from that night is going to bed with her medical alert device on. The next memory she has is waking up in the ER with her loved ones by her side.

“At 2:16 a.m. Sunday morning, I was called by Medical Guardian alerting me that an emergency was happening at my grandmother's house,” said Gloria’s granddaughter, Cindy. “Medical Guardian also dispatched police and EMS as well. Minutes later I arrived with EMS pulling in behind me. We found my grandmother unconscious in her bedroom floor slipping into a diabetic coma. She doesn’t remember waking up, getting out of bed, falling, nothing. Without this device alerting us, the outcome would have been very different.”

We connected with Gloria to learn more about what had happened, and to make sure that she was feeling better. She told us that she was required to stay in the hospital for observation for a few days after learning that adjustments needed to be made to her insulin plan. If it wasn’t for her device’s fall detection technology, she said, she’s not sure she would be here to tell her story.

“My family and emergency responders were by my side all thanks to this little piece of equipment that I barely notice I have on anymore,” said Gloria. “It’s my favorite jewelry and the best money I’ve ever spent!” 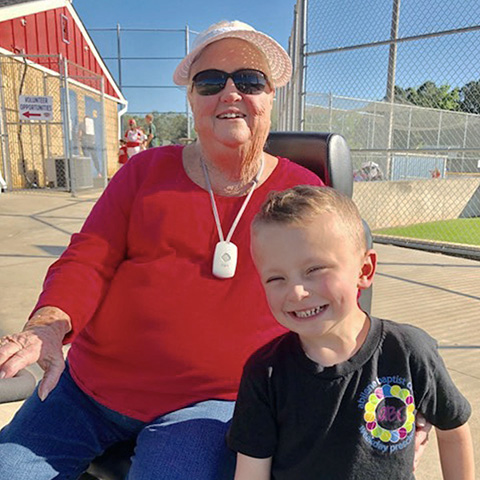 Gloria doesn’t let age slow her down. Although she retired in the ’90s as a medical technologist, she then went on to work for American Red Cross for another 16 years as a head supervisor for the mobile blood services. Today, Gloria currently owns her own toxicology business that her granddaughter helps to run. Recently celebrating her turning 83rd birthday, Gloria says that she does not let age define her because she feels as though she’s only 38 years old.

She continues to live a very active lifestyle, keeping up with her two children, nine grandchildren, and eight great-grandchildren! Gloria loves attending her great grandchildren’s sporting events, shopping with her grandchildren, going to church, and enjoying the beauty of the great outdoors in her hometown, Augusta, Georgia.

When asked what she loved best about her device, Gloria responded without skipping a beat: “If something happens, I know help is always there for me.”