Enrolling In Medicare at the Right Time 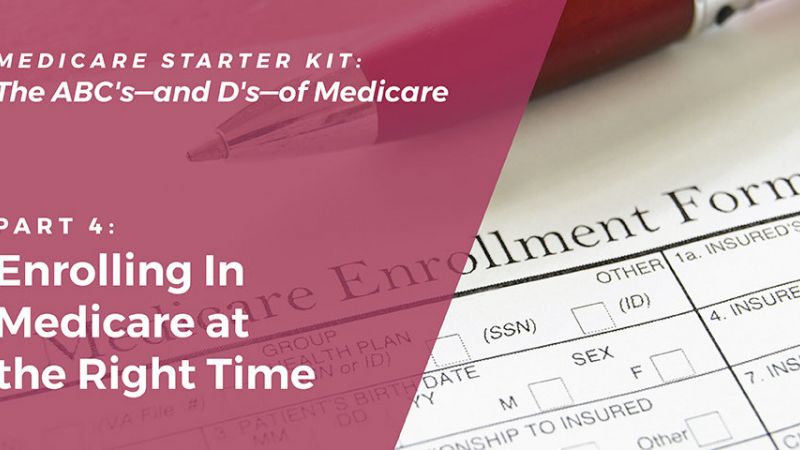 Deadlines for Medicare enrollment are pretty strict, so it’s important to mark the dates on your calendar in order to enroll in Medicare without paying penalties. We’ve identified the deadlines for when an eligible participant can enroll in Medicare, special enrollment situations, the consequences for missing deadlines, and the steps to take to enroll so that you don’t have to.

When is the Medicare Initial Enrollment Period?

As soon as you become eligible for Medicare, there is a seven-month Initial Enrollment Period to enroll in Medicare Part A and Medicare Part B. The seven-month Initial Enrollment Period starts three months before your 65th birthday, continues through the month you turn 65, and includes the three months after your birthday month.

The start date of coverage depends on the date you sign up, but if you wait until the month you become 65 to enroll Medicare, Medicare Part B coverage may be delayed and cause a coverage gap. The same goes for waiting to sign up during the 3-months following your 65th birthday month.

If you’re having trouble figuring out the best time for you to enroll, Medicare.gov offers a tool to determine your Medicare eligibility date and estimate the cost of your Medicare premiums.

When is the Medicare General Enrollment Period?

When is the Medicare Special Enrollment Period?

If you, your spouse, or a family member is still working, and you are covered through a group health plan based on work through your employer or union, you will be included in the Special Enrollment Period. Following the month that your employment situation ends or your group health plan insurance ends, you will have eight months to enroll in Medicare Part A and Medicare Part B. If you have the ability to plan an official retirement date, be sure to factor in your need for health insurance and plan accordingly.

What are some other Medicare enrollment situations?

There are other special circumstances that may affect your Medicare eligibility, including:

Qualifying through a disability

If any of these situations apply to you, call 1-800-MEDICARE to help determine your eligibility.

When is signing up for Medicare prescription drug coverage available?

To enroll in Medicare prescription drug coverage through a Medicare Advantage plan (also known as Medicare Part C) or Medicare Part D plan, a 65-year-old can enroll during their seven-month Initial Enrollment Period.

What are the consequences of missing an enrollment deadline?

If you miss the deadline for a Medicare enrollment period, you may have to pay a significant penalty:​

How do you enroll in Medicare?

To enroll in Medicare, visit Medicare.gov or call 1-800-MEDICARE.​

Figuring Out Your Medicare Choices