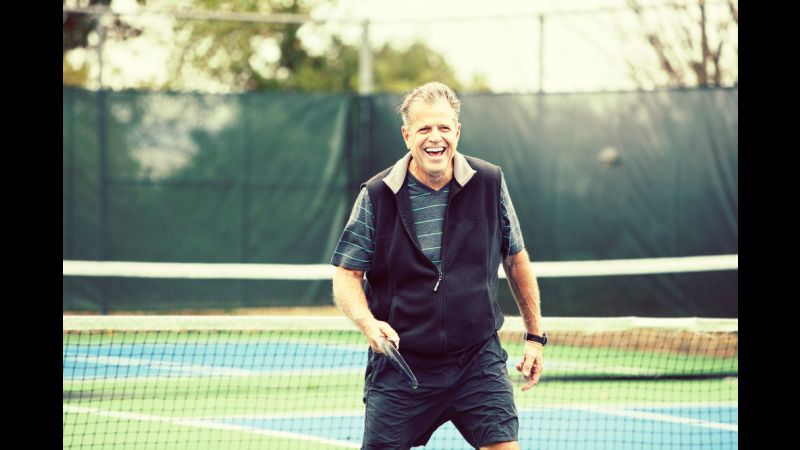 Pickelball is a little-known sport that can have a big impact on athletes who have developed arthritis as they’ve aged. Pickleball combines aspects of tennis, badminton, and ping-pong. It’s played on a court similar to a badminton court, but with a low net like in tennis. You play with racquets that look like oversized ping-pong paddles and a smaller-than-average wiffleball. The lower net and wiffle ball allow the game to be accessible to people of all ages and abilities, but still encourages a good amount of competition for seasoned athletes.

Pickleball has been gaining momentum with active people of all ages across the country.

The Benefits of Pickleball

The History of Pickleball

1965 – After playing golf one Saturday during the summer of 1965, Joel Pritchard, congressman from Washington State and Bill Bell, successful businessman, returned to Pritchard’s home on Bainbridge Island, WA to find their families sitting around with nothing to do. The property had an old badminton court so Pritchard and Bell looked for some badminton equipment and could not find a full set of rackets. They improvised, cutting shafts of the damaged rackets and found a perforated plastic ball. The rackets didn’t work very well, so the dads created four wood paddles, similar to today’s wood paddles. At first they placed the net at badminton height of 60 inches and volleyed the ball over the net. As the weekend progressed, the players found that the ball bounced well on the asphalt surface and soon the net was lowered to 36 inches. The following weekend, Barney McCallum was introduced to the game at Pritchard’s home. Soon, the three men created rules, relying heavily on badminton. They kept in mind the original purpose, which was to provide a game that the whole family could play together. The Pritchards had a cocker spaniel named Pickles, who became interested in this new game. Whenever a ball would come his way, he would take the ball and run off with it, because you see, it was Pickle’s ball. And that is how the game got its name.

1975 – The National Observer published an article about pickleball followed by a 1976 article in Tennis magazine about “America’s newest racquet sport.”

1984 – USAPA “was organized to perpetuate the growth and advancement of pickleball on a national level.” The first rule book was published in March. The first composite paddle was made by Arlen Paranto, a Boeing Industrial Engineer. He used the fiberglass/nomex honeycomb panels that commercial airlines use for their floors and part of the airplane’s structural system. Arlen made about 1,000 paddles from fiberglass/honeycomb core and graphite/honeycomb core materials until he sold the company to Frank Candelario.

2008 – Pickleball was included for the first time in the National Senior Games Champion Festival held in Providence, Rhode Island

The Role of Safety in Pickleball

Even though pickleball comes with many benefits for older adults, that doesn’t mean that your safety is automatically guaranteed while playing this, or any other low-impact, sport. Luckily, you don’t have to let the fear of falling or experiencing an accident keep you from exercising. With a Mobile Guardian medical alert system, you can rest assured that Medical Guardian’s top-rated monitoring center will send immediate help sent to your exact location should you experience a fall or accident while exercising.